On 27 September 2015, the Czech cinematographer, Jaromír Šofr, was awarded the prestigious Award for Lifetime Achievement, “Golden Camera 300 for Lifetime Achievement”, at the Manaki Brothers International Film Festival in Bitola, Macedonia. He accepted the award from the President of the European Federation of Associations of Cinematographers, IMAGO, Mr. Nigel Walters. The Manaki Brothers Festival is the oldest film festival focused on cinematography. The Manaki brothers were pioneers of cinematography in Macedonia in its very beginnings, similar to the personality of Jan Kříženecký in our country, who owned the first camera purchased from the Lumière Brothers in Paris. Together with CameraImage festival in Poland and the Camera EYE festival in the Czech Republic, they form a trio of acclaimed festivals where cinematographers and directors can compare the results of their creative work with regard to the creation of the visual part of the film. So far, this prestigious award was awarded at the Manaki Brothers festival only to the Czech cinematographer, Miroslav Ondříček, in 2001. Jaromir Šofr is the second Czech cinematographer enjoying this great professional recognition. 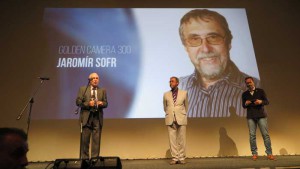 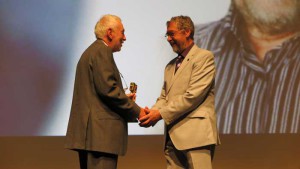 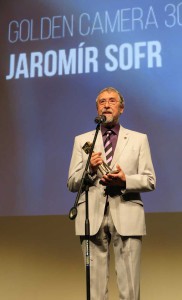 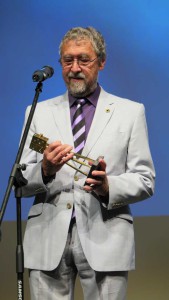 Part of the visit of the film festival was also a workshop on the of Czech Cinematography School which was supplemented by a presentation of the results of the NAKI research project carried out at the Academy of Performing Arts in Prague by prof. Marek Jícha. In the presence of the IMAGO President, Mr. Nigel Walters, who hosted them, Jícha, together with Šofr, made a presentation on the DRA – Digitally Restored Autorizate method in Bitola. It is a newly established method of digitisation of films belonging to the national film fund with the participation of experts nominated by professional associations. The method leading to the digitisation of films of good quality, under control of the authors of the film image, sound and direction, eliminates the ethical problem associated with generation of new, unsolicited versions of films created by people who are not experts without the knowledge of the authors which versions damage the good name of films and violate the Copyright Act. Part of this festival was also the world première screening of a digitally restored film The Stone Bridge by the director Tomáš Vorel. The restoration of this film was carried out in the production of Vorelfilm with the support provided by the České Bijáky Foundation, using the knowledge and results of sampling under the NAKI research programme. Thus the DRA method which is the subject of research at AMU and which has just been completed and is ready for certification proceedings was verified. The Academy of Performing Arts opens right now a pilot operation of a specialised digital workplace for consultancy and analysis of old archived films: CPA Laboratory – Centre of Consultancy and Analytical Services at the Cabinet of Film and Video Technology of the Cinematography Department of FAMU.

Cinematographers thus perform a task that they were commissioned to perform by the Ministry of Culture of the Czech Republic which funds this research project by the amount of 52 million crowns.

Jaromír Šofr: “Work is work, but the interest demonstrated here in our methodology of restoration which is able to preserve the work in spite of the time in a visually unchanged form was, for me, an added value to the achieved recognition.”

Marek Jícha: “It is my great honour to be so close to the great success of Czech cinematography and personal appreciation of my friend and professional colleague. Jaromír Šofr is one of the greatest personalities of Czech film. It is only abroad that one fully realizes it. Respect for and appreciation of the contribution Czech cinematographers gave to the world cinematography is present all around us which is very obliging and brings a sense of immense responsibility.”

Nigel Walters: “IMAGO looks forward to the Czechs bringing the DRA presentation to the next meeting of our organization in Jerusalem. That’s what we agreed at the meeting Delphi, in Greece where the General Meeting of IMAGO gave the Czechs a task to work on the DRA at home and to bring the results to be assessed.”