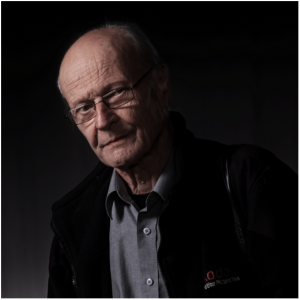 born on 9 October 1939 in Prague, graduate of the Graphic Arts School and the Film Faculty of the Academy of Performing Arts in Prague, majoring in cinematography. After graduation, compulsory military service in the Army Film, where as a cameraman he made his first feature film ” THE END OF AUGUST IN HOTEL OZON ” dir. J. Schmidt. In Film. The first one was in 1968 the film “ING. ČERT’S MURDER” directed by Ester Krumbachová. He collaborated with a number of filmmakers, e.g. with directors F.Vláčil, J.Menzl, E.Schorm, O.Lipský, J.Schmidt, O.Vávra, K. Kachyna and others. Two multi-screen projects for ARTCENTRUM (for EHS and for Indian Hindu sect)

Since 1991 he has been a teacher at FAMU in Prague, Department of Cinematography. Habilitated in 1998 with the thesis ” The psychological effect of the film image “, in 2005 appointed professor on the basis of the thesis : ” Manipulation of the illusion of space by the film image .”

He is a member of AČK – Association of Czech Cinematographers, a member of ČFA – Czech Film Academy and FITESU.