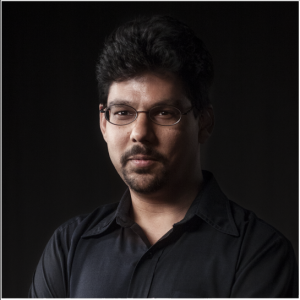 Born on 24 February 1980 in Colombo, Sri Lanka. In 1989, he emigrated, under dramatic circumstances,
with his family to Germany. In the summer of 1990, after the Velvet Revolution, he again moved with his family to former
Czechoslovakia.
A graduate of the Department of Cinematography at FAMU. Received an acknowledgement of the dean for his outstanding academic/study achievements and carefulness in
processing art projects. In late 2010, he became a member of the Association of Czech
Cinematographers (ACK) and, in 2015, was elected to the Presidium of the ACK.
While still a student, he shot the first Czech student film in the DC4K format – Non-swimmers (directed by Jakub
Šmíd). In an opinion poll of the Hospodářské noviny daily, Talent 2012, he is mentioned by his professor and a recognized
cinematographer, Jaromír Šofr, from the ACK as one of the most talented young Czech
cinematographers. In the same year, Non-swimmers won the Czech Lion – Magnesia Award for the best
student film. Since 2014, he has been a PhD student and an external teacher at the Department of Cinematography, FAMU.
He is fluent in Czech, English and German and can make himself understood in Singhalese. He is a vegetarian and in his spare time
he enjoys making photographs. He is single and lives in Prague.
Awards:
• Jaroslav Kučera Award – given by the Association of Czech Cinematographers to FAMU students |
2014
• Czech Lion – Magnesia Price – for the best student film (Non-swimmers, directed by Jakub Šmíd) | 2012
• Talent of the Year – Hospodářské noviny opinion poll, answer provided by the cinematographer Jaromír Šofr ACK | 2011
• FAMU’s dean award – for outstanding academic results | 2010