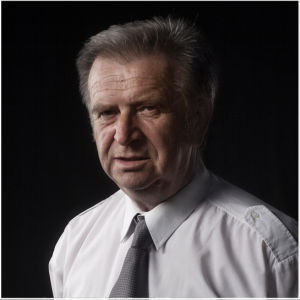 I was born in 1943 in the family of a village teacher. I spent my childhood in Čimelice, a town where the “Secondary Industrial Film School” was located at that time. Thanks to this, I had the opportunity to follow the professional, cultural and sporting activities of the students of this school, as well as to attend screenings of archive films that were shown to the students at that time as part of their studies.All this sparked my interest in film and everything related to film. After finishing primary school, I applied to study at the Cimelice Film School and was accepted. At the “Secondary Industrial Film School” at that time, students could choose from three specialisations, one of which was focused on laboratory film processing. I chose this particular branch and successfully completed my studies in 1961 with a final examination. In the same year I started working at the then Barrandov film laboratory plant in Gottwaldov. I was an employee of the Gottwaldov film laboratories until 1965, when I moved to the FL parent plant in Barrandov.  At that time, the only university at which some courses focused on laboratory film processing were taught was FAMU in Prague. In 1972 I applied to FAMU to study at the same time as I was employed, namely for the specialisation “Cameraman Technician”. I was accepted. I successfully completed my studies with a state exam in 1978.    I worked at the “Barrandov Film Laboratories” until 1993. In the course of my employment at FLB, I held a number of positions from film lab technician to technologist to technical deputy director. In 1993, Czech Television announced a competition for the position of head of the Film Laboratory of Czech Television. I applied for this competition and got the job. In 1995 I was approached by the company director of “Kinotechnika Praha a.s.” saying that this company was preparing the construction of a new film laboratory and offered me a job. I accepted this offer, and joined Kinotechnika. Debra Media a.s. cooperated with Kinotechnika. The aim of this cooperation was to create a modern, so-called “Digital Film Laboratory”, which was to allow combining the advantages of film as a medium with a high information capacity with the advantages of digital image processing. I personally was entrusted with the task of developing the technology of the laboratory and ensuring its implementation. I developed the project, but the above business plan could not be implemented due to lack of money. I was an employee of Kinotechnika Praha a.s. and then Debra Media a.s. until 2004, when I retired.       In the course of my professional practice I was also engaged in teaching and publishing activities. In the period from 1978 to 1982 I worked as an external teacher at the “Secondary Industrial School of Film” in Čimelice, where I taught a course focused on laboratory film processing. From 1991 to 1993 I taught the course “Sensitometry” for the “Film Laboratory Technician”. In the period from 1996 to 2015 (i.e. for 19 years) I worked as an external teacher at the “Private Higher Vocational School of Film” and later at the “Film Academy of Miroslav Ondříček” in Písek. At the film school in Písek I lectured on the subjects “Film Technology” and “Latest Technological Trends”. Over the years I have written a number of teaching scripts for my students or have translated many technical texts, for example “Machines and equipment” (for laboratory film processing), “English – Czech explanatory dictionary”, “Lighting and Exponometry”, “Light and colour”, “Magic of computer image processing”, “Sound in film and television”, “Digital and stereoscopic cinematography” and many others.
*** Translated with www.DeepL.com/Translator (free version) ***