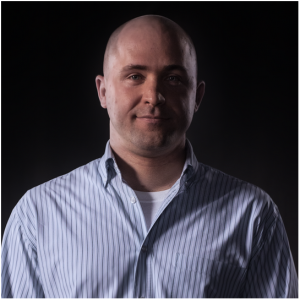 Ing. Karel Fliegel, PhD In 1998, graduated from the Technical College of Communication Technology (Secondary School of Telecommunications) (SPS ST) in Prague, specializing in video and audio technology. In 2004, he obtained the cum laude Ing title in Radioengineering – Television and Sound Technology at the the Czech Technical University in Prague (CTU), Faculty of Electrical Engineering (FEL). In 2005, he was at a three-month scholarship stay at the Université catholique de Louvain in Louvain-la-Neuve, Belgium. During this scholarship stay, he focused on the issue of image processing using artificial neural networks. In 2011, he defended his dissertation work on the topic & quot; Modelling of Visual Perception when Assessing the Quality of Distorted Image& quot. Currently, he is a member of multimedia technology at the Department of Radioengineering of the CTU. From 2004 to 2007, he worked in this Department as an assistant lecturer; since 2007 he has been a lecturer at the same Department. He gives lectures and teaches in seminars under a number of courses specialising in photonics, television, multimedia techniques and theory of image signal processing. More than 70 students successfully completed their Master’s or Bachelor’s theses under his leadership. He was a member of several committees for final state exams. He participates in training of students of the Faculty of Biomedical Engineering (FBMI) of the CTU in Prague and the Film and television faculty (FAMU) of the Academy of Performing Arts in Prague. His pedagogical activities are regularly appreciated in the student poll. Within his research, he deals with the issue of image processing, imaging systems and methods of image compression. He was a member of scientific teams within more than 10 projects, mainly in the field of image processing. Currently, he is a deputy head of the WG 4 working group (Database and Validation) within the COST IC1003 action: European Network on Quality of Experience in Multimedia Systems and Services (QUALINET) and a member of the Steering Committee COST Action IC1105: 3D Content Creation, Coding and Transmission Over Future Media Networks (3D-ConTourNet). Since 2005, he has been a member of IEEE, SPIE, and a member of the Executive Committee of the Czech and Slovak Society for Photonics (CSSF). He was a member of the organisational and programme committees of several conferences. He is a reviewer of several journals, e.g. Elsevier Pattern Recognition, Elsevier Image Communication, IEEE Transactions on Circuits and Systems for Video Technology and Radioengineering.